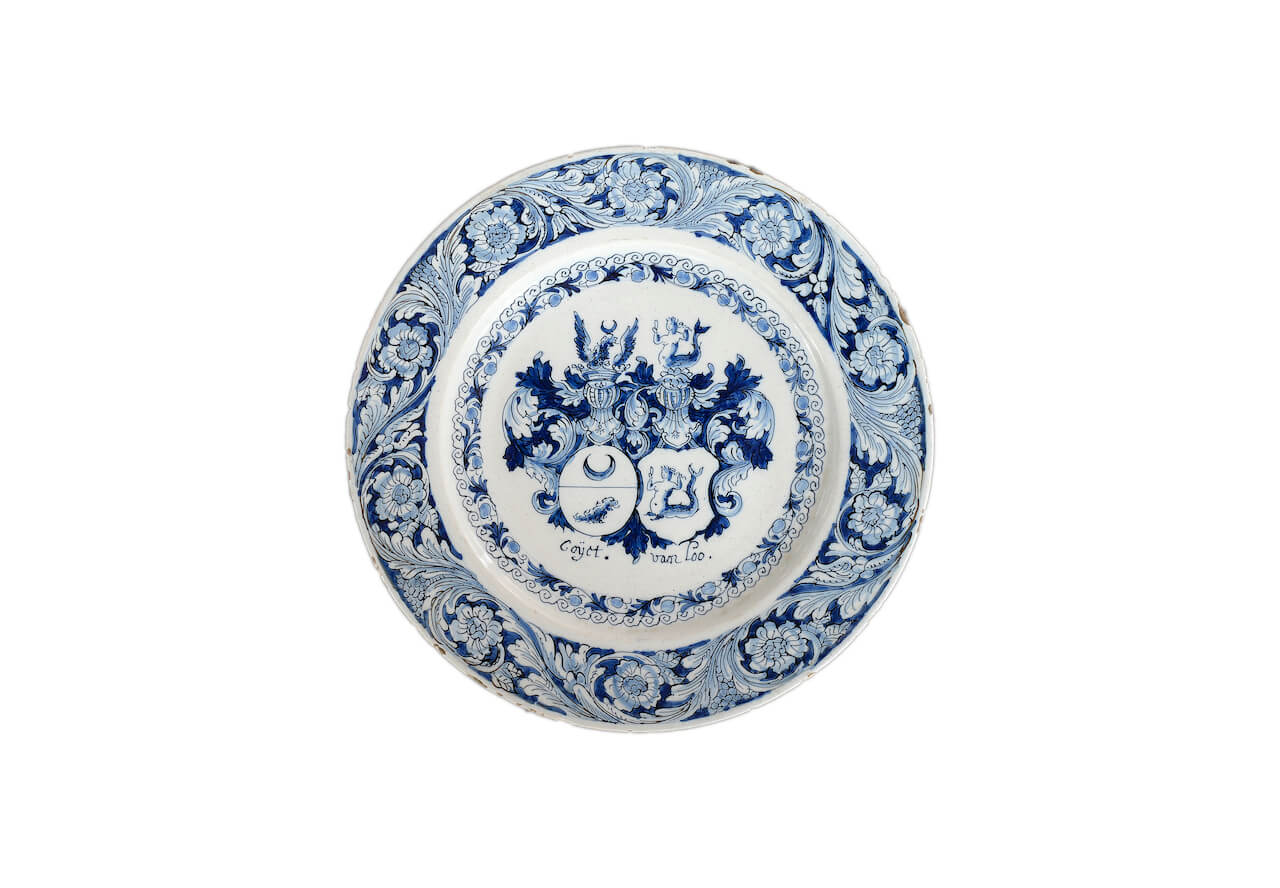 Every month we present a special object from the Aronson Antiquairs’ collection. This month we would like to show you this blue and white armorial plate. The plate was commissioned at De Metaale Pot (The Metal Pot) factory during the ownership of Lambertus van Eenhoorn, from 1691 until 1721, or his widow Margaretha Teckmann until 1724.

Although the Van Loo family originated from the Dutch hanseatic city of Elburg, Everhart was living in Arnhem shortly after his marriage in 1679. Van Loo became an important merchant, because in 1706 he is mentioned as a guild master of the Kramers or St. Nicolas guild in Arnhem. Although little is known about Suzanne, the Coijet family is well known since many family members were in service of the Dutch East India Company (VOC), especially her father, Frederik Coijet, who played an important role in the activities of the VOC. When Suzanne was born, her father was chief merchant at the Batavia Castle, the administration center of the Dutch East India Company’s Asian trade empire in Jakarta. In early 1647, he was appointed governor in Japan and was also the governor of Dutch Formosa from 1656 to 1662. When Formosa was lost to the Chinese Ming loyalist Koxinga in 1662, he was accused of treason and was exiled to the Banda Islands for the rest of his life. However, in 1674 William III granted leave to Coijet and he was able to end his days in one of the United Provinces.

Procuration books show that Everhart and Suzanne were a well-to-do couple who had the means to purchase goods beyond the basic necessities. In light of this, the couple probably commissioned several Delftware dishes with their coat of arms around 1700, because the LVE mark on the plates indicate that the earliest date of production is 1691.

Marked LVE 1 1 in blue for Lambertus van Eenhoorn, the owner of De Metaale Pot (The Metal Pot) factory from 1691 until 1721, or his widow Margaretha Teckmann until 1724

Painted in the center with two coats of arms, one with a half moon and a lion’s head and neck, beneath a helmet and a crown surmounted by the crest of a lion’s head and a half moon; the other with a mermaid beneath a helmet surmounted by a mermaid, issuing elaborate foliate mantling, below inscribed with the family names Coijet. and Van Loo, encircled by a foliate scroll work band, the rim with a blue-ground border reserved with floral scrollwork.