Every month we present a special object from the Aronson Antiquairs’ collection. This month we would like to show you this pair of blue and white models of slippers!

The model for slippers are seventeenth century mules, or trippen, a word used to describe a mule with an upturned toe. Trippen (or patijnen) were wooden shoe covers. They were developed around 1400 and were subsequently worn by the wealthy middle class to protect their shoes from unpaved, muddy streets. These trippen are seen as the forerunners of clogs. The slippers however, were worn by men and women in the home. Mules were part of the home uniform of the seventeenth and eighteenth-century man, as are the house coat and hat. Slippers like these were often made of precious fabrics, such as silk, which would not get dirty by wearing them indoors. Leather shoes were typically worn outdoors.

In contrast to Delft slippers, small shoes like the present pair are more uncommon. The model for slippers are seventeenth century mules, or trippen, a word used to describe a mule with an upturned toe, which were worn by men and women in the home. On the other hand, shoes as the present pair were worn outdoors. They were worn by both sexes and typically had stacked heels, a fashion promoted by the French court of Louis XIV. Heeled shoes were a status symbol, as they were mostly worn by the nobility. After the influence of the King, the fashion spread to the masses.

Beginning in the late seventeenth century, various models of miniature slippers and shoes were produced in Delftware, ranging from blue and white, to polychrome and petit feu examples. The shoes, which were always designed according to the latest fashions, were produced in a range of types and sizes, attesting to their popularity. Often, they were painted to suggest the original materials. There is no distinction made between the left and right shoes of this miniature pair, as they were formed from a single mold.

Miniature ceramic shoes like these were produced in pairs and sold at annual fairs and markets. Although most examples are undated, some are dated and bear initials, indicating that they were offered as gifts. It is highly possible that shoes and slippers were made in little kilns by so-called thuiswerkers (home workers), who were not part of a factory, as with so many other miniature objects. 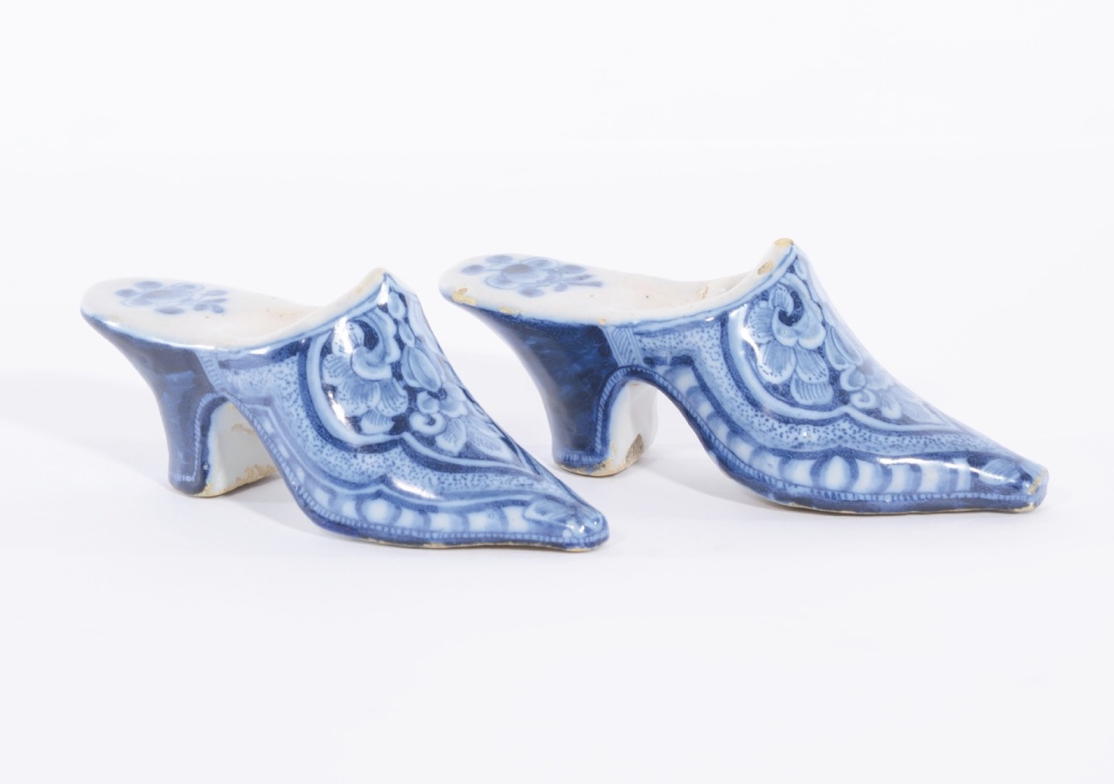 Pair of Blue and White Models of Slippers
Delft, circa 1760

Each painted on either side of the toe with a profusion of floral clusters enclosed within a zigzag border down the front and around the edge, and blue-washed heels.