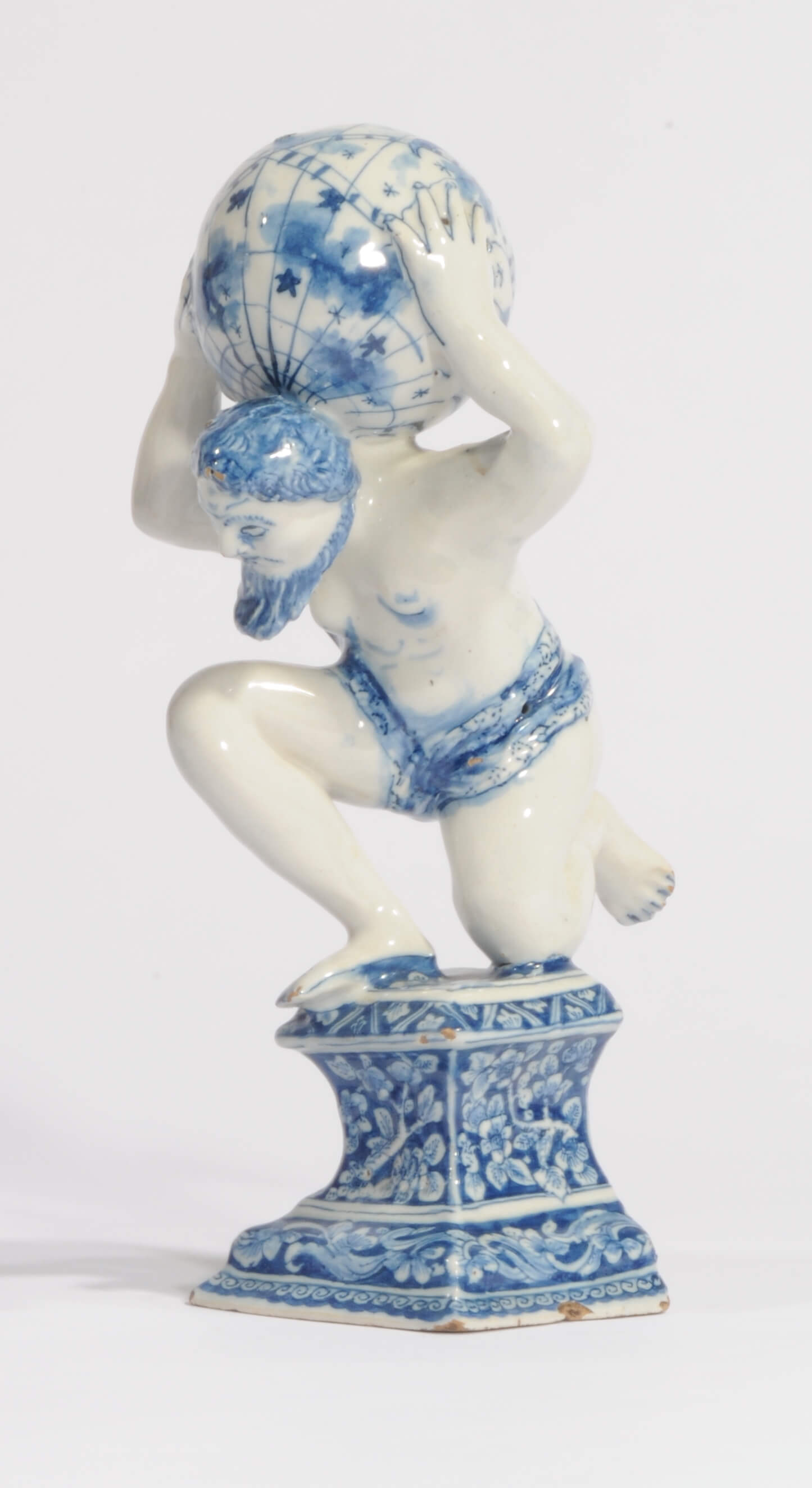 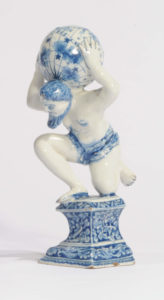 Every month we present a special object from the Aronson Antiquairs’ collection. This month we would like to show you this remarkable blue and white figure of Atlas (circa 1710). The god, depicted as an older, bearded man, kneels on a pedestal and gazes upward. Although many people think Atlas is carrying the globe, or the world, he actually carries the heavens. A celestial sphere painted with the sun, a crescent moon, stars and clouds is supported on his shoulders.

The story of Atlas is derived from Greek mythology. The god was a second generation Titan, who sided with his brother Menoetius in the war between the Titans and Olympians. In an act of betrayal, his two older brothers Prometheus and Epimetheus, sided with the ultimately victorious Olympians. As a defeated Titan, Zeus condemned Atlas to stand at the western edge of Gaia (the earth) and support Ouranos (the sky) on his shoulders to prevent their primordial embrace.

By the sixteenth century, the image of Atlas carrying a globe became an allegory for astronomy and was synonymous with world maps. Although the first collection of world maps appeared in 1570, the term “atlas” was not used until 1595 in Gerardus Mercator’s (1512-1594) Atlas sive Cosmographicae Meditationes de Fabrica Mundi et Fabrica Figura (Atlas, or Cosmographical Meditations upon the Creation of the Universe). Mercator even included a figure of Atlas on the title page.[1]  Henceforward, the god is often featured on title pages or frontispieces of atlases.

During the Dutch Golden Age of the seventeenth century, Amsterdam was renowned as the center of trade and cartography in Europe. Two statues of Atlas designed by the architect Jacob van Campen between 1648 and 1665 for the city’s town hall (The Royal Palace on the Dam square) exemplify this cultural heritage. The first statue surmounts a tympanum of the outer facade, in which the personification of Amsterdam is flanked by the ‘Four Continents.’ The notion of Amsterdam as the center of the universe is continued inside the building, where a huge statue of Atlas is the prominent feature of the Citizens’ Hall (Burgerzaal). Furthering the theme, the marble floor in this main hall is inlaid with the Eastern and Western hemispheres and the northern celestial sphere. The southern counterpart was intended as a ceiling painting, however it was never executed. Atlas’ symbolic representation of reigning superiority and strength is timeless, as evidenced by Lee Lawrie’s famous bronze statue of Atlas installed in 1937 in Rockefeller Center in New York City.

The prototype for this figure is the ‘Farnese Atlas’, a second-century Roman marble copy of a Hellenistic sculpture.[2] The Farnese Atlas is the earliest extant statue of the Greek mythological Titan, and is also the earliest known model of a celestial sphere. As such, it is the oldest depiction of Western constellations, dating around 150 A.D., but may represent constellations mapped earlier in Greece, possibly by Hipparchus (circa 129 B.C.).  Although the direct source of this Delft Atlas figure has not yet been discovered, it was likely modeled after a bronze copy of the Atlas Farnese.

Blue and White Figure of Atlas
Delft, circa 1710

Marked 1 above 0 in blue

Modeled as an older, bearded god gazing upward, wearing scant drapery patterned with oeils-de-perdrix, supporting on his shoulders a celestial sphere painted with the sun, a crescent moon, stars and clouds, and kneeling on a square pedestal painted on the top with blossoms above a border of leaf-patterned triangular panels, the waisted central section lightly molded on three sides but painted on the four sides with flowering branches, and the ogee-molded foot painted with a sinuous flowering vine above a whorl band at the edge.