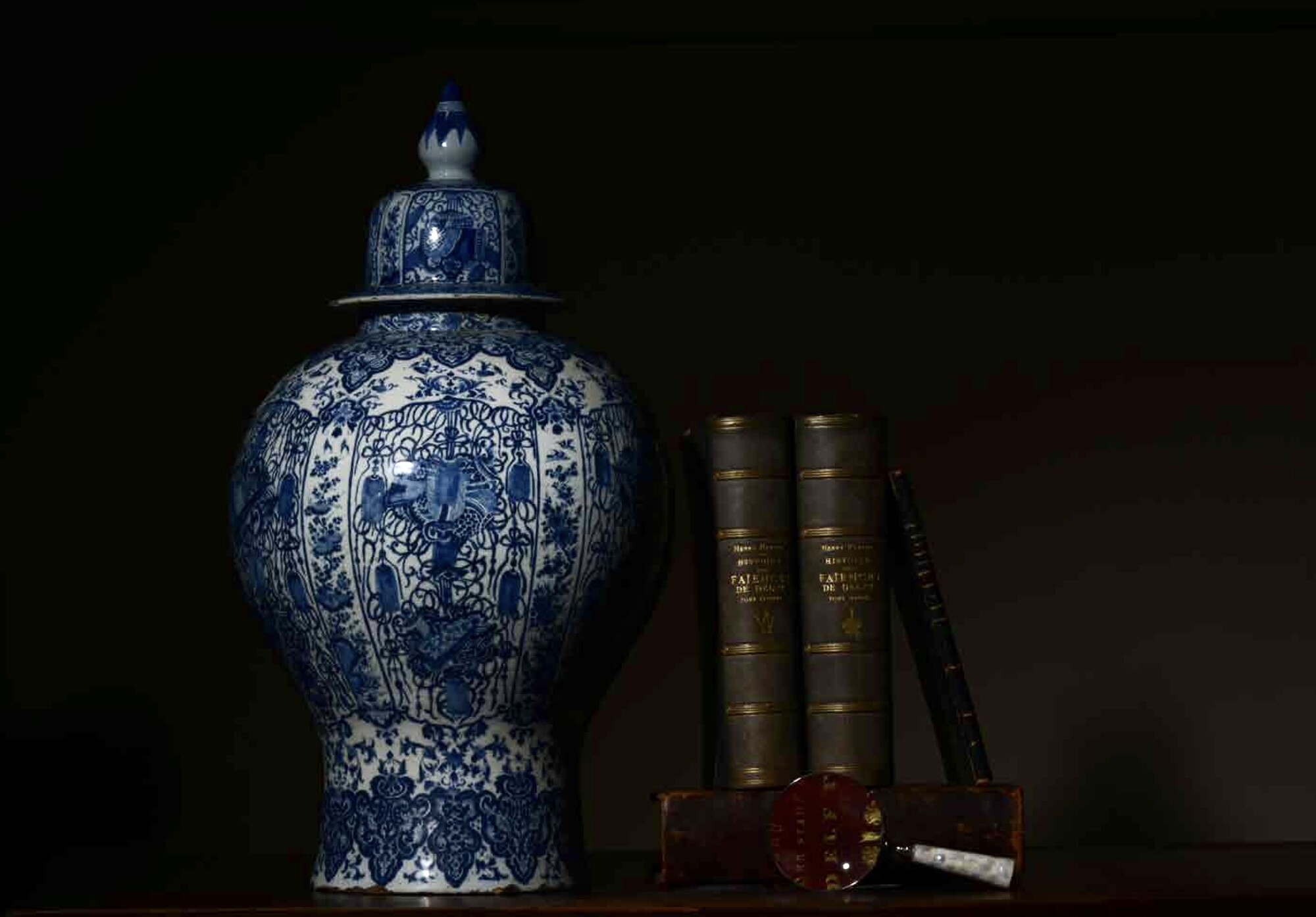 Despite the Portuguese importations of Asian goods starting in the early sixteenth century, Chinese porcelain was rarely seen in Europe before 1600. The small quantities of porcelain that were imported to Europe were rare and expensive, and almost exclusively collected by the nobility. In 1600, the market for Chinese porcelain changed significantly when the Dutch opened trade with Asia with a few small trading companies in Holland and Zeeland. The traders eventually merged to form the Dutch East India Company, the Verenigde Oost-Indische Compagnie (VOC) in 1602. At first, the VOC mostly imported spices and small quantities of other Asian products, such as porcelain. The first two large cargos of Chinese porcelain to reach Holland came on Portuguese ships that were captured by the Dutch in 1602 and 1603. The cargos also contained spices, silks, and musk. The one thousand pieces of porcelain within the cargos were auctioned in Middelburg and Amsterdam, and they fetched great profits. The VOC’s successful sale of its Chinese porcelain ignited the interests of the Dutch people, and the company focused greater attention on Chinese goods. 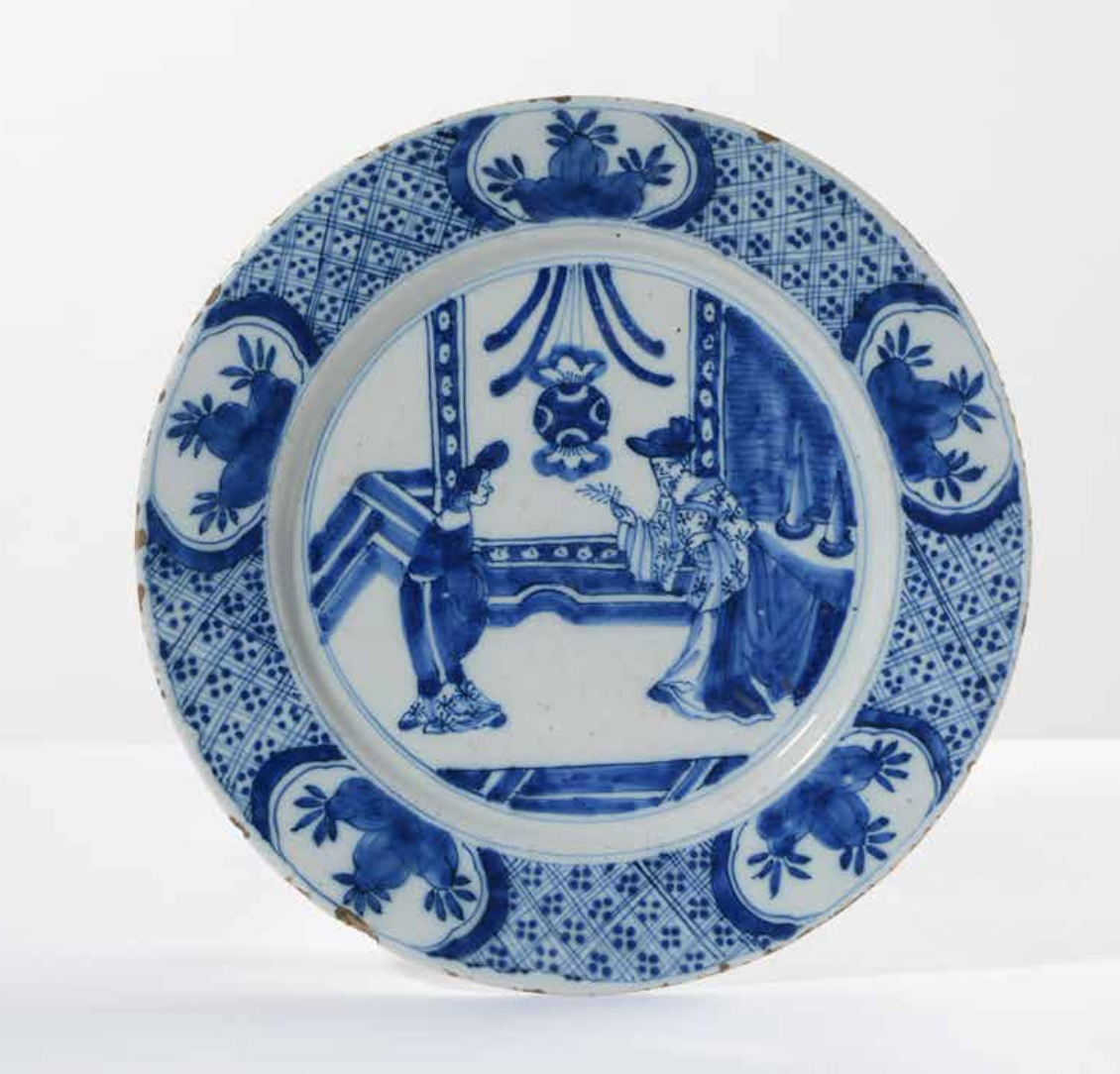 From approximately 1605 to 1635, the VOC mostly imported Chinese porcelain known as ‘Kraakporselein’ (Kraak-porcelain) to Holland, a name that possibly derived from the Portuguese ships called ‘caraccas’. The decoration, always in underglaze cobalt blue, is characteristically divided into alternating wide and narrow panels, which contain Buddhist and/or Daoist symbols. The central panel often shows landscapes or riverscapes with deer, birds and large flowering plants. Since the exotic Chinese porcelain wares became more sought-after than the majolica wares that were produced in the Netherlands at that time, the Delft potters started creating faithful imitations of the Chinese Kraak-porcelain from the Wanli period (1573-1620) for table use and for decorative purposes throughout the seventeenth century.

Between 1630 and 1640, porcelain wares of a superior quality were imported in Holland. Known as ‘transitional wares,’ this type of porcelain was a new source of inspiration for the Delft potters. The term ‘transitional’ refers to the political changes in China that transpired after the death of emperor Wanli (1619), which ultimately led to the fall of the Ming and the establishment of the Qing Dynasty (1644). In comparison with the Kraak-wares, the transitional wares were not divided into panels. Instead, the entire area was covered with a continuous scene that often consisted of landscapes with animals or figures either conversing or in a moment of spirited action.

Until circa 1645 the trade in Chinese porcelain by the Dutch East India Company (VOC) proceeded without problems, but from then on civil unrests in China brought imports of Chinese porcelain to a halt. Not only the production in Jingdezhen stagnated, but also supply routes were cut off. The directors of the VOC had recognized the impending lack of porcelain in time and began to search for alternative options in Japan. 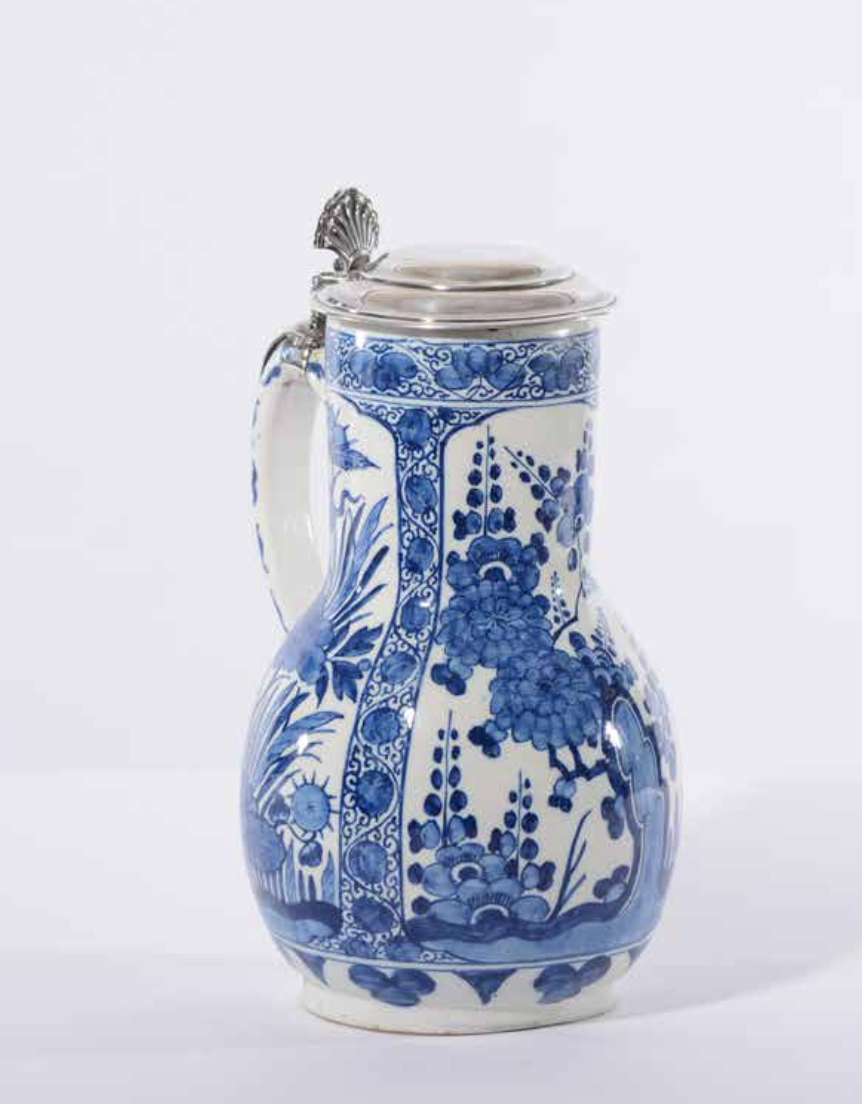 Although ceramics were being made in the Japanese city of Arita since the beginning of the seventeenth century, the domestic Japanese demand for porcelain was mostly fulfilled by imports from China. After 1645 the supply of Chinese porcelain also decreased in Japan, and there was a greater demand for the porcelain from Arita. The production in Arita was even more stimulated when the VOC started to acquire porcelain from these kilns from circa 1655. In Arita, the potteries produced both the blue painted wares and porcelain decorated with designs on top of the glaze in brightly colored enamels. The colorful Imari and Kakiemon Japanese porcelain wares reached the Netherlands between 1660 and 1670. They were immensely popular in the Western market, yielding high prices and inspiring Delft potters to emulate the colorful designs.

Imari porcelain was named after the port on the island of Kyushu from which the porcelain made in Arita was exported. Imari was known for its rich asymmetrical decoration in blue and red with gold glazes, a color combination that was not known in China at the time and became an inexhaustible source of inspiration for the Delft potters. The Delft potters were also driven to reproduce the delicate pastels of the Kakiemon porcelains, experimenting with various color and firing techniques to achieve the Japanese style. 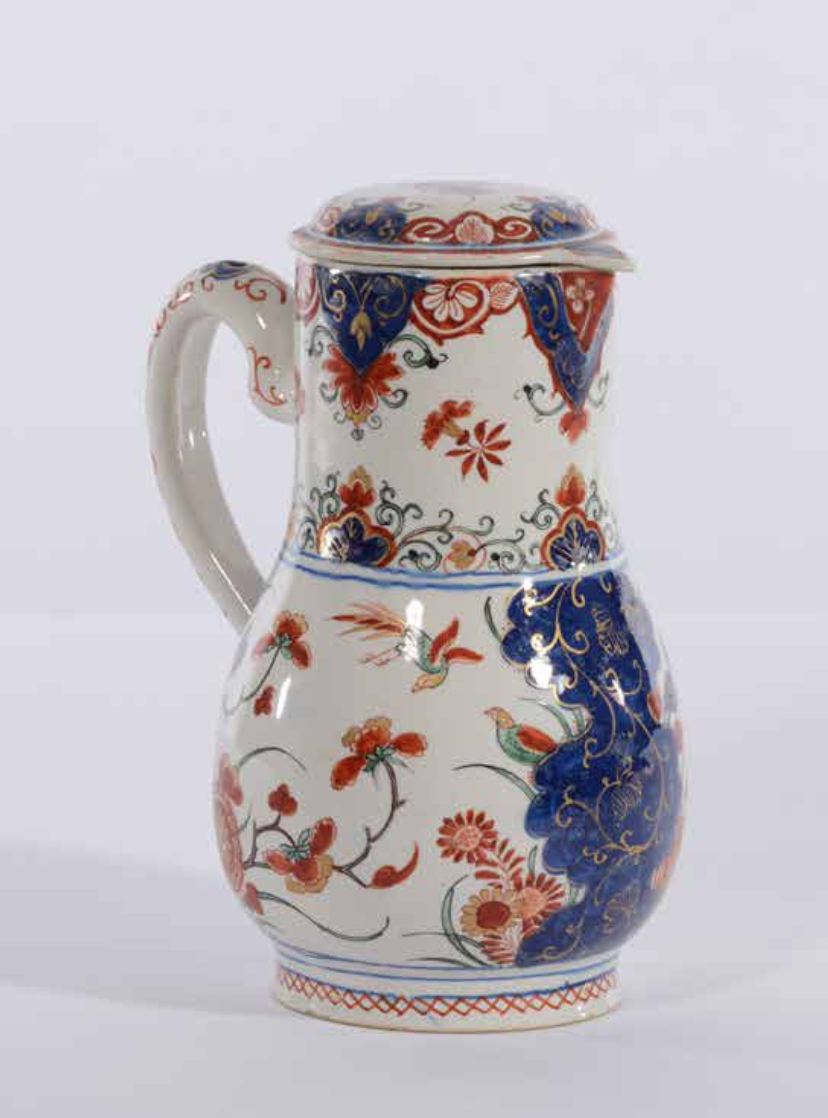 Although the Delft potters began to emulate these showpieces, they held on to their own Dutch (or the then familiar Chinese) interpretation. This meant that the colors were directly inspired by the Japanese wares, but the forms and decorations were also inspired by European, mostly Dutch, objects. The same can be seen on the Delftware objects inspired by Chinese examples. A unique type of decoration evolved from these different Chinese styles, which is freer and shows the Delft interpretation. Chinese figures, landscapes, architecture and attributes are rendered and composed in a way that is not Chinese, but semi-Chinese: Chinoiserie. This style originated in the seventeenth century and quickly became a dominant fashion throughout Europe, enduring through the first half of the eighteenth century. The faience painter chose especially the elements which were in his eyes the most characteristic for exotic Asia and he combined it as he wished.