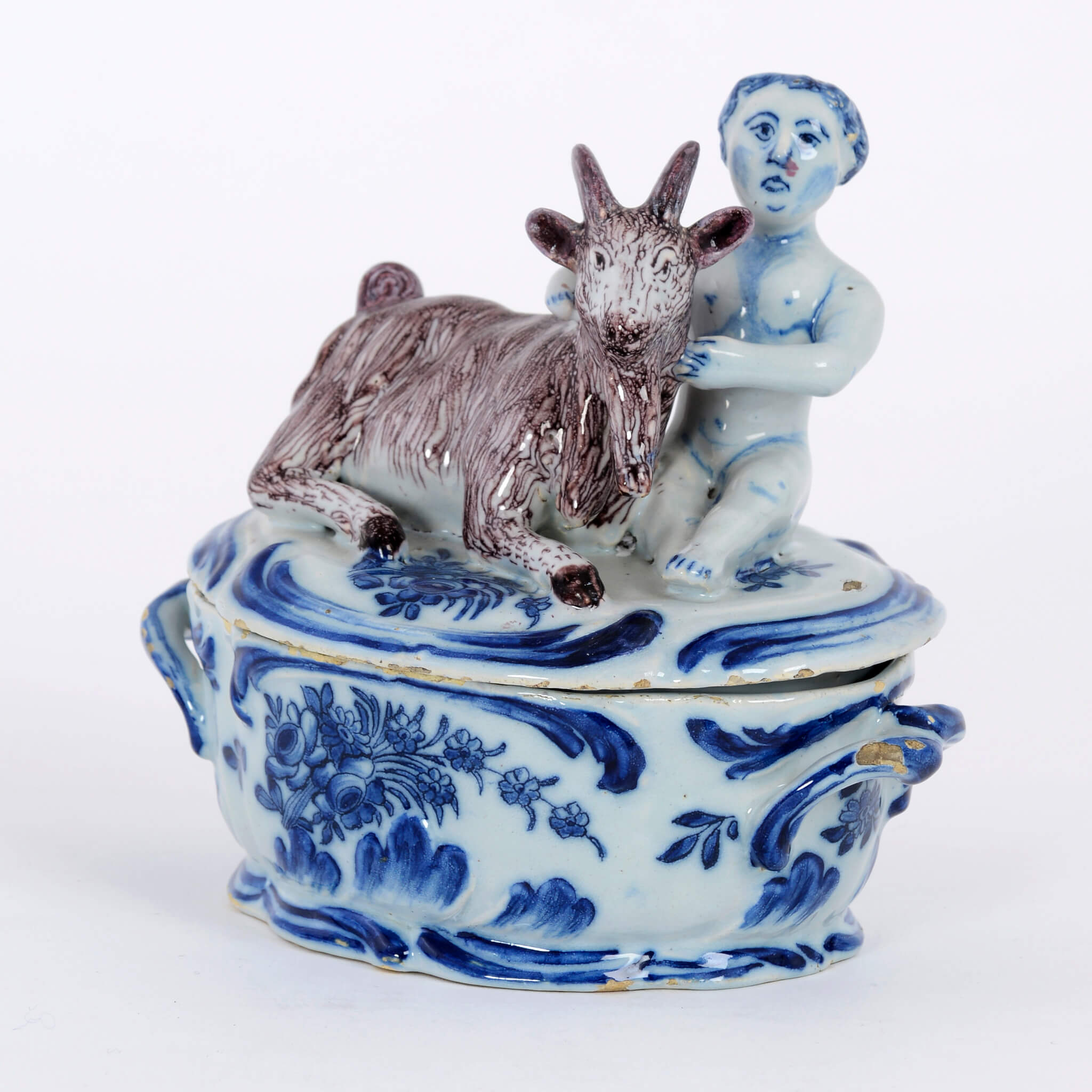 Every month we present a special object from the Aronson Antiquairs’ collection. This month we would like to show this polychrome putto and goat tureen, from circa 1765. Its cover is modeled as a reclining goat with a coat finely delineated in manganese, accompanied by a naked putto.

By the middle of the eighteenth century dining ‘à la Française’ (in the French manner) was the fashion in Europe. Inspired by the French court of Louis XIV (1638-1715, reigned 1643-1715), the serving dishes were laid out on the table symmetrically and in a very ordered way for each course and guests would serve themselves from the platters, bowls or tureens within their reach. A 1790 Housekeeper’s Instructor cited by Ann Eatwell (in P. Glanville and H. Young [eds.], Elegant Eating, Four Hundred Years of Dining in Style, London (Victoria and Albert Museum) 2002, p. 48) illustrates that a dinner ‘à la Française’ included three courses: the first of “soups, boiled poultry, fish and boiled meats”, the second of “different kinds of game, high seasoned dishes, arts, jellies, etc.,” and the third a dessert course of “fruits, and various kinds of ornamental pastries…”. Each course provided an opportunity to display and use a variety of tablewares: plates, serving vessels and a panoply of decorative objects.

With this new fashion, the range of tableware expanded quickly and complete services with matching decoration began to be produced. The potteries in Delft quickly accommodated the new taste of the nobility and the wealthy bourgeoisie for adorning their tables with brightly colored table wares, such as butter tubs and tureens of various sizes and shapes. Amongst them were created true-to-life vessels representing fruits and vegetables, everyday’s people activities and zoomorphic tureens. Although destined to be table ornaments, most of these forms were both decorative and functional; large tureens for soup, stew or ragout, butter dishes, and smaller tureens for sauces and creams, and even open sweetmeat dishes formed as flowers or leaves.

Zoomorphic tureens most likely evolved from polychrome sugar or wax figures and bird-shaped pastries that decorated the Renaissance table. Before they were modeled in clay, tureens were initially made in silver. Starting in the mid-1730s, Parisian silversmiths were inspired by game and nature for their most extravagant rocaille silver creations. They were produced in numerous faience and porcelain centers around 1750, including Strasbourg and Sceaux in France; Höchst and Meissen in Germany; Chelsea and Longton Hall in England; and most spectacularly in Chinese export porcelain made predominantly for the Iberian market. In some examples, the tureens modeled as animals such as deer and birds, but also fruits and vegetables may have been created as more permanent and palatable replacements for real-life examples, such as the severed head of a wild boar that represented the trophy of a hunt.

Farm and domestic animals, such as cows, horses and goats, were among the most prolific animal figures in both white and polychrome Delftware. Although there are no similar examples of the present tureen, there are several other tureens with goats, with and without accompanying figures. These tureens must have made imaginative centerpieces on a dinner table. It therefore must have been a special pleasure to be the guest at a dinner party given by a prosperous family in the eighteenth century. With the invitation came the anticipation of a veritable feast for the senses: a gustatory treat to taste the beautifully prepared and perhaps exotic foods, and a visual treat in their presentation and in the table setting itself.

Polychrome Putto and Goat Tureen and Cover
Delft, circa 1765

The cover modeled as a reclining goat with a coat finely delineated in manganese, accompanied by a naked putto seated within molded scrolls and blue-painted floral sprays repeated below on the two-handled rococo oval tureen.