About three weeks ago, the new exhibition Nederland dineert, Vier eeuwen tafelcultuur (Dutch Dining, Four Centuries Table Culture) opened in the Gemeentemuseum Den Haag. With three meals a day, dining and decorating the table for special occasions was and is of all times. Delft potters have played an important role in bringing a custom of french origin to The Netherlands.

When we look at the earlier paintings of the seventeenth century, we see guild members, families or other groups gathered around the table for the meal. The table is covered in a variety of vessels and plates, holding food and liquids. At the time, it was common practice to have stoneware jugs, pewter plates, glasses and earthenware pots, bowls and so on. Utensils were sparse, except for wooden or metal spoons, and knives to cut for example a larger piece of meat. For the same purpose, large forks were used, with two long pins, but they were unsuitable to put in ones mouth. The food was set in the middle of the table, and the guests just used their hands or a piece of bread to eat. Towards the end of the seventeenth century, smaller forks were added to the more common spoons and knives, and dinner guests were no longer expected to eat with their fingers. Items as washbasins with ewers lost their function at the table, since the guests did not have to wash their hands in between each course.[1] 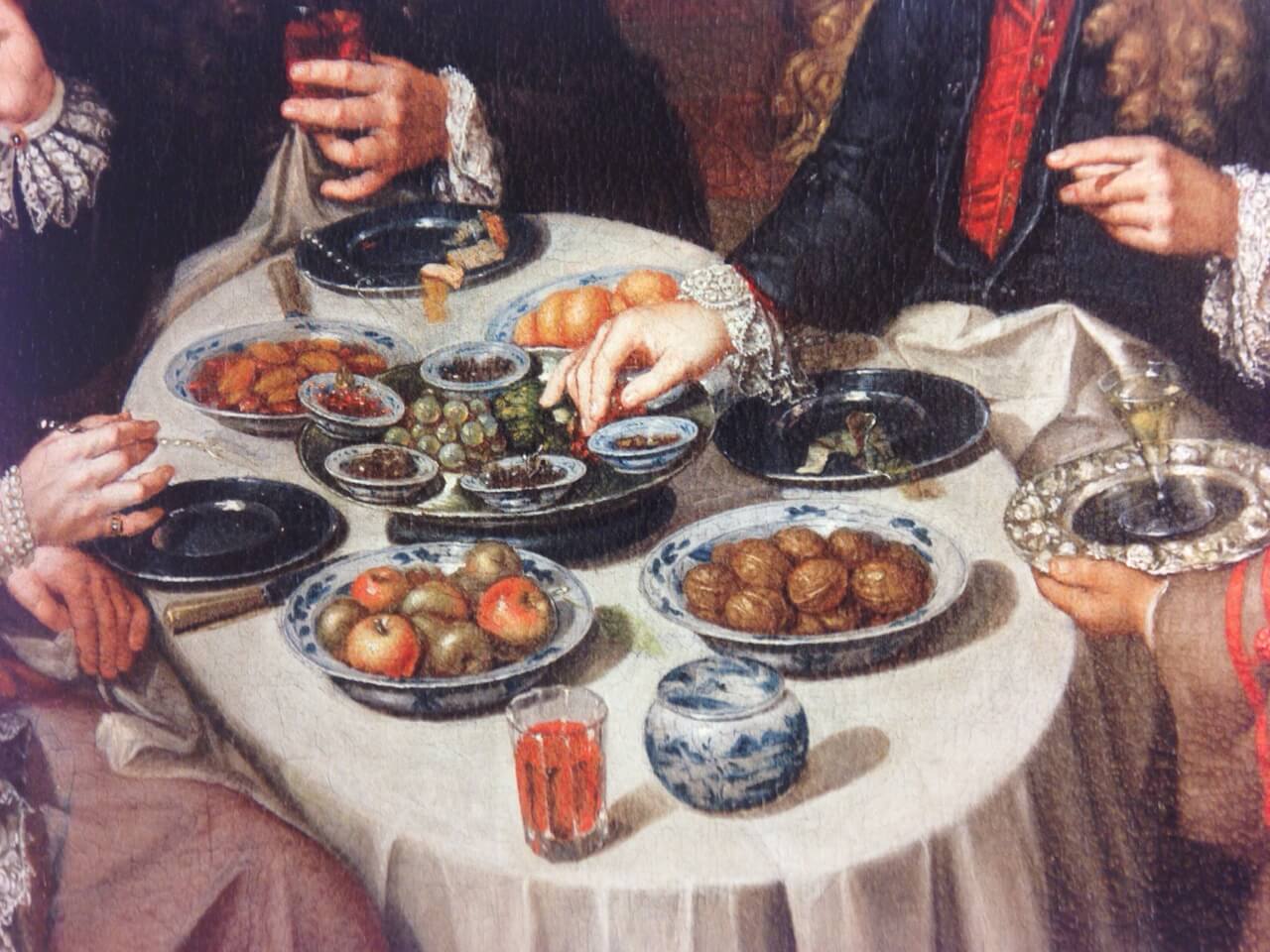 In the second half of the seventeenth century, the french influence could be felt throughout Europe. Not only the french language was adopted as formal language in conversation and literature, also in costume and for example, gardening, the focus was on France. When Louis XIV took up his reign in 1661, his aim was to establish his position in France and in Europe as a whole, by using the decorative arts and royal refinement. During meals, the grandeur of the French court was displayed by the largest dinner services seen at the time. This set the standard for the other royalty in Europe, and created the wish for large services consisting of plates, dishes, platters and bowls of different sizes, but with matching shapes and decorations.[2]

The Delft potters quickly took up the challenge to create the like in tin-glaze earthenware and looked around for examples to emulate in delftware. Often, they found them in silver objects. Delftware was a wonderful medium to combine objects of silver, copper, glass, pewter and earthenware, since it could be shaped in a wide variety of forms. Among the newly desired objects of use were saltcellars, spice boxes, cruet sets, sugar- and spice casters and butter tubs. But even candelabra, water pitchers and coolers could be decorated as to fit perfectly into the ‘bigger picture’ to create the desired unity.[3]

In contrast to the earlier Medieval table setting a new, informal way of laying the table was introduced, ‘service à la Française’ with sets of cutlery for every guest besides a personal plate and glass. During two or more courses, separate dishes were brought out and laid out around the table symmetrically.

Recipe books not only gave examples for individual recipes, but suggested complete menus and table settings, depending on the season or the occasion.[4] The publication of one of the first cookbooks, Le Cuisinier François by François Pierre de la Varenne in 1651 caused a culinary revolution. La Varenne refines existing recipes, and reduces the amount of spices used food.[5]

The first course consisted of a variety of soups and stews, accompanied by prepared meats, the second of the roast with salads and vegetables. Both could be served on formal and heavy silver or gold plates, but for the final course lighter ceramics were preferred. Le fruits or later the dessert (from desservir, French for ‘clear the table’), was light-hearted in character and often accompanied with music, dancing or other entertainment. Dessert was often associated with the outdoors and often this course was laid out as a garden, complete with small buildings or statues in sugar-work. The special association with porcelain meant that the fruit was piled up high in several layers on dishes called pourcelaines, though in fact they could be made of metal. A sweet, spiced wine, hippocras, was served to go with the sweets.[6]

This fan shaped dish was originally part of a larger set, consisting of six or eight dishes with in the centre a small, star shaped dish.[7] Dishes like this have often been referred to in modern literature as ‘rijsttafel sets’, because they are nowadays are used to lay out on the table when eating different Indonesian or Chinese dishes at the same time. This could not possibly be correct, because people in Western Europe were unfamiliar with Indonesian food in the 17th century.[8] Further research has yet to give more insight in the influence of repatriating VOC officials (and their staff) in the local culture in The Netherlands. It would be interesting to see, if, and how, the customs of Far Eastern lifestyle were incorporated in Western countries.[9]

It is more likely, that a variety of sweets were served in these small dishes during dessert. At the time, people loved sugared orange peels, dried fruit or summer fruit in brandy. The discovery of new area’s in Brazil and the Caribbean made the import of larger quantities of sugar possible: where at first honey was mostly used as sweetener to make preserves, sugar could be used for dry sugared fruits.[10] Other popular sweets were nuts and seeds covered in a sugarcoat, sometimes even coloured, pear marmalade or preserved ginger, chestnuts and fennel. All these delights were presented in small dishes as these, and therefore the reason why in inventories, these sets of dishes were referred to as ‘preserve-sets’, or ‘confituur-starren’ in Dutch.[11]