Modeled as a man with a beard, wearing a black cap with red rim, a green blue vest and his short blue hose above a brown under-hose and red socks, the woman wearing a blue delineated headscarf, a red delineated yellow bodice with blue lacing, and blue delineated long skirt pulled up to her knees, both squatting above a blue and white chamber pot, standing on an hexagonal blue, yellow, red and brown marbleized base resting on six peg feet.

This figural group of a man and a lady on a chamber pot belongs to a category of Delftware figurines that were made from the mid-eighteenth century onwards. This figural group referenced themes of love and humor, whose literal meanings have been lost over time and are therefore difficult to interpret. Humorous figurines, such as this defecating man and woman undoubtedly brought the viewer fun. These figures may be related to proverbs and sayings such as ‘iemand te kakken zetten’ (‘getting someone to poop,’ which means making fun of someone) or ‘schijt hebben aan’ (‘to not give a shit’). Objects like these are sometimes dated, for example an 1806 dated single figure of a defecating man illustrated inAronson, pp. 156-157, no. 79, which can indicate that they were commissioned and offered as gifts.

Only two other group of two figures on a chamber pot are known. One of these figures on a rectangular base is in the M. Lavino collection, currently at the Kunstmuseum, The Hague. The other on a similar hexagonal, black decorated base, in a private collection, is marked APK for Pieter Kocx, owner of The Greek A factory from 1701 through 1703 or his widow through 1721. Two figures of a male and a woman in the Museum Arnhem in Arnhem (inv. no. AB 8523 and AB 8529) are illustrated in Vormen uit Vuur, Vol. 229, 2015/3, p. 52, nos. 77 and 78. 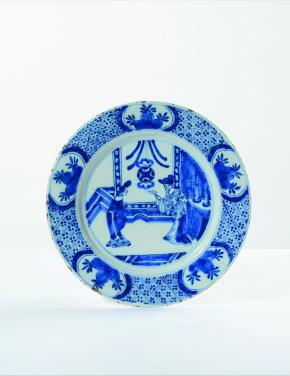