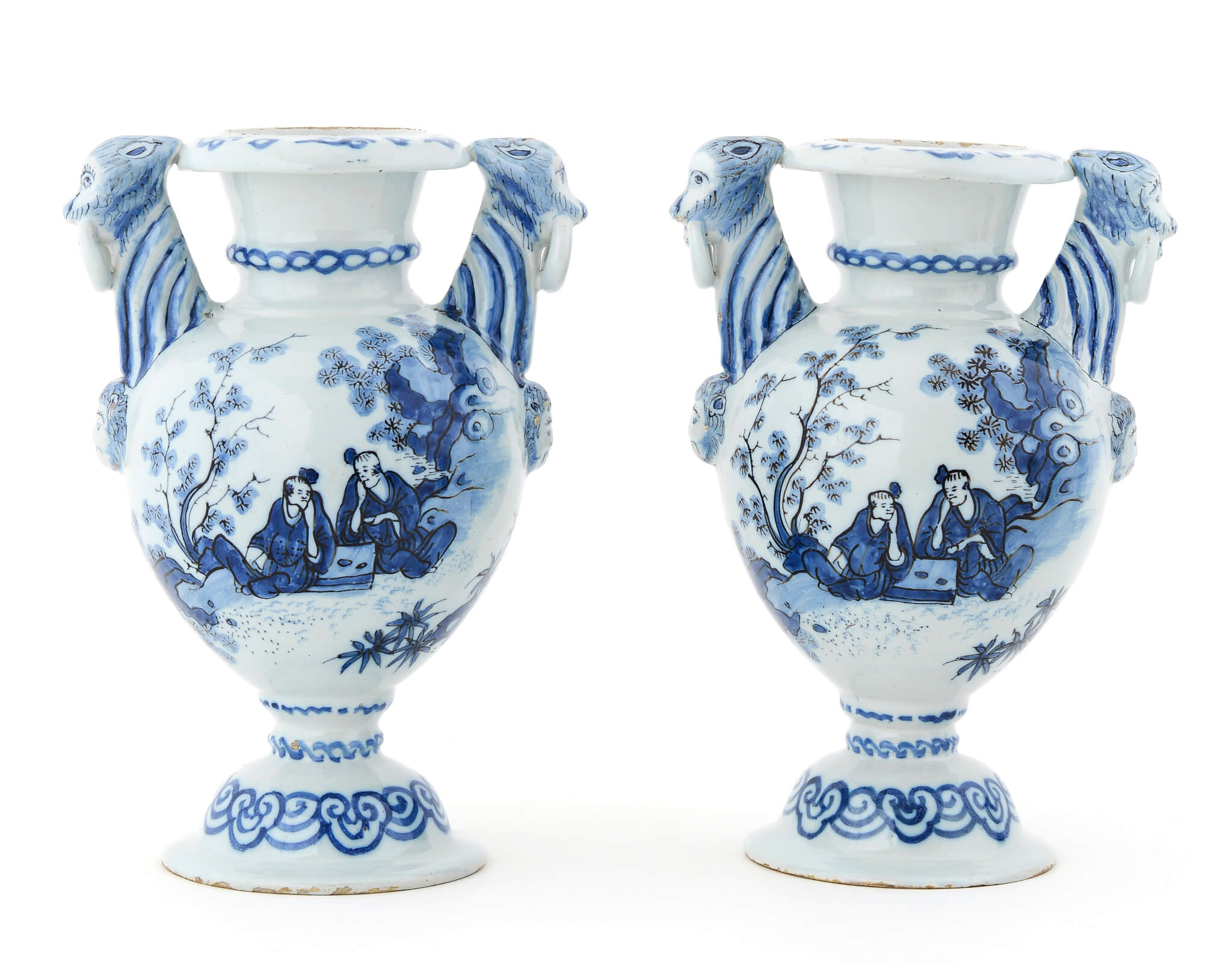 Marked SVE 4 in blue for Samuel van Eenhoorn, the owner of De Grieksche A (The Greek A) Factory from 1678 until 1685

Each ovoid body painted with a continuous scene of Chinese figures amidst rocks, pines and other shrubbery, depicting on the front an attendant holding a large fan and standing between two seated dignitaries, and on the reverse two men seated on the ground and conversing over a low table, the shoulders with tall animal-head handles suspending rings from their mouths above the human-mask terminals, the flaring cylindrical neck encircled with a moulded ‘chain’ border beneath the everted rim, its upper edge with a border of double scrolls and circlets, and the domed foot with a ruyi-head and scroll border beneath a modified ‘chain’ band around the ankle.

Archeologist Nina Jaspers has discovered that similarly shaped vases applied with colored garlands and putti, produced by Les Trois Mores Factory in Nevers, circa 1620-40, were present in The Netherlands in the seventeenth century; see Jaspers, op. cit., pp. 2-16, and p.10, ill. 10a-b, which includes one vase 17 cm. (6 11/16 in.) high and one in fragments. These Nevers designs, themselves were inspired by sixteenth- and seventeenth-century Italian prototypes, which Jaspers, op. cit., pp. 3 and 8, and Lahaussois, op. cit., pp. 68-70, suggest were most likely influenced by Ligurian maiolica and/or metal examples and not the Faenza maiolica wares generally mentioned as a source. A 1666-dated Savona apothecary jar of this shape, 50 cm. (19 3/4) high, is illustrated in A. Faÿ-Hallé and C. Lahoussois (editors), La Faïence Européenne au XVIIe Siècle. Le Triomphe de Delft (Paris 2003), pp. 36 and 187, cat. 12; and three other Savona examples were sold at Sotheby’s in Amsterdam on September 25, 2001, lots 88 and 102.

The shape is known also in French silver. From the middle and third quarter of the seventeenth-century, silver vases with animal handles were made after prints by artists such as Jacques Stella (1596-1657) and Jean Marot (1609/29-1679), in turn after Italian metal examples; see J. Pijzel-Dommisse, “Buires, gueridons en cassoletten: ‘Frans’ zilver in het interieur van stadhouder Willem III”, in R.J. Baarsen, A. Ouwekerk (editor), Het Nederlandse binnenhuis gaat zich te buiten, internationale invloeden op de Nederlandse wooncultuur (Leiden 2007, Leidsch kunsthistorisch jaarboek 14), pp. 104-109, ills. 9-12. A pair of Dutch silver vases of this type, with the arms of Hans Willem Bentinck, made in The Hague by Adam Loofs, the court silversmith of William III (1650-1702), probably in 1693, is illustrated ibid., p. 104, ill. 9. But given that the Delft vases do not have covers, nor do they have the garlands and gadrooning often found on the silver examples, it is more likely that they emulated the faience, rather than the silver models.

With respect to their function, Christine Lahaussois in Van Aken-Fehmers 2007, p. 67, has suggested that the Nevers ‘vases à chimères’ had an ecclesiastical purpose as flower vases on an altar. This is supported by the existence of faience vases of this shape, with either grotesque or scroll handles, which are sparsely decorated in blue and white or in colors with the IHS Christogram or a portrait of Saint Peter, examples of which are cited in the second paragraph of this not. Two other vases with scroll handles, inscribed IHS (the monogram used in Western Christianity to signify the first three letters of Jesus’ name: iota-eta-sigma, but also interpreted in Latin as Jesus Hominem Salvator or “Jesus Savior of Men”) are known in public collections: one 21.6 cm. (8 1/2 in.) high in the Rijksmuseum, Amsterdam, illustrated in Hiding 1929, p. 75, ill. 63; and a smaller example, 11.5 cm. (4 1/2 in.) high, in the Museum Boijmans van Beuningen, Rotterdam, illustrated in Lunsingh Scheurleer 1984, p. 186, ill. 20. Two vases decorated with a portrait of Saint Peter were sold at Christie’s in Amsterdam on December 10, 1997, lot 369, and November 2, 2005, lot 419, respectively. A further ecclesiastical hint is added by Jet Pijzel-Domisse, op. cit., p. 105, ill. 12, who notes that Italian bronze candelabra with a middle section of similar shape are known to exist, largely in Italian churches.