The pear-shaped body painted on either side in white, iron-red, blue, green and yellow with a flowering and budding prunus branch rising from a pierced rock, the short spout and loop handle with yellow scrollwork bands, and the cover with two budding prunus branches alternating with two small insects beneath the yellow- striped conical knop, the interior covered in a white glaze.

Note: Early teapots are generally of a small size, not only because tea was an exotic and expensive luxury and consumed sparingly, but also because the teapots were used as infusion pots, and once the strong brew was poured into a cup, it would be diluted with water from a kettle. The present teapot, however, is of a particularly small size referred to as a ‘tasting pot’. As described in the exhibition catalogue Thema thee: de geschiedenis van de thee en het theegebruik in Nederland, Rotterdam (Museum Boijmans van Beuningen) 1978, p. 32, before serving tea, the hostess would offer several blends in these small pots to be tasted by the guests so that they might select the one they would like to drink. K. Duysters, Theepotten steengoed, Roodstenen theepotten uit Yixing en Europa, Arnhem (Historisch Museum het Burgerweeshuis) 1998, p. 31, adds to this that small tasting pots were brought along to the tea shop by ladies in order to taste the teas before choosing the kind to buy. Red Delftware tasting pots are recorded in a 1704 shop inventory of Diewertje Jansdr. and Trijntje Douwesdr., two Amsterdam porcelain shopkeepers. As described by Van Aken-Fehmers 2001, p. 46, fig. 1, in their Delft ‘porcelain’ assortment was a selection of ’18 grote roo theepotten’ (‘18 large red teapots’), ‘3 dosijn dito wat kleijnder’ (‘3 dozen ditto, slightly smaller), ‘2 dosijn roo dito wat kleijnder’ (‘2 dozen red ditto, slightly smaller’) and ‘2 dosijn dito proefpottjes’ (‘2 dozen ditto tasting pots’).

In the late seventeenth and early eighteenth centuries, when the taste for the exotic thrived, a rare group of Dutch Delftware was produced with a black glaze. This so-called ‘Black Delftware’, inspired by oriental and subsequently European lacquer wares, is one of the rarest productions of the Delft factories. Besides vases, plaques, dishes, ewers, brush backs, etc., many black Delftware items are tea utensils, such as teapots, tea canisters or cups and saucers, examples of which are illustrated in exh. cat. Amsterdam 1962-63 and Van Aken-Fehmers 2003. Around 1680 tea-drinking had become a beloved pastime, particularly among ladies. ‘Black Delftware’ teawares were aesthetically compatible with other oriental items made of lacquer, porcelain, Yixing stoneware or red Delftware, which served to heighten the oriental sphere surrounding this exotic beverage. But they were, in fact, even rarer and more precious than the imports from the Far East. Due to the difficult production process for the black glaze and its decoration, there are at present only about 65 pieces of ‘Black Delftware’ known in the world (Aronson 2009, p. 40).

Teapots of a round model were produced by another major factory, De Grieksche A (The Greek A) under the ownership of Pieter Kocx (1701-1722), and an example of this shape can be found in the Rijksmuseum, Amsterdam, illustrated by Van Dam 2004, p. 121, ill. 71. Another from the Frits Phillips Collection, Eindhoven, is illustrated in Aronson 2007, p. 28, no. 19. A black Delft ribbed teapot also marked PAK for Pieter Kocx is illustrated by Van Aken-Fehmers 2003, p. 123, ill.4. 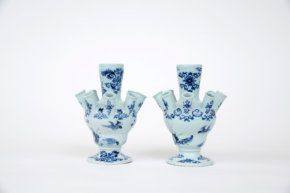 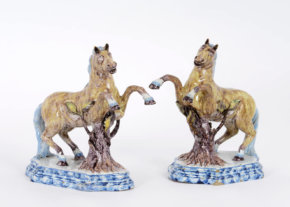 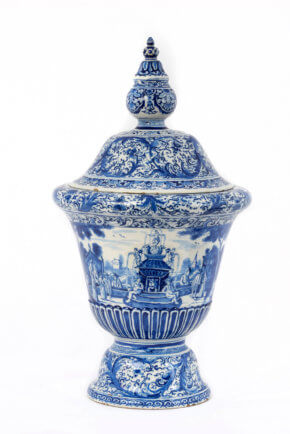 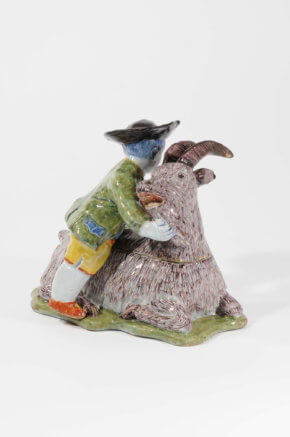 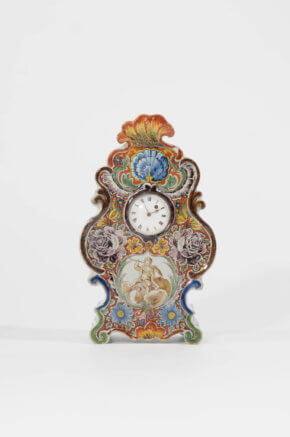