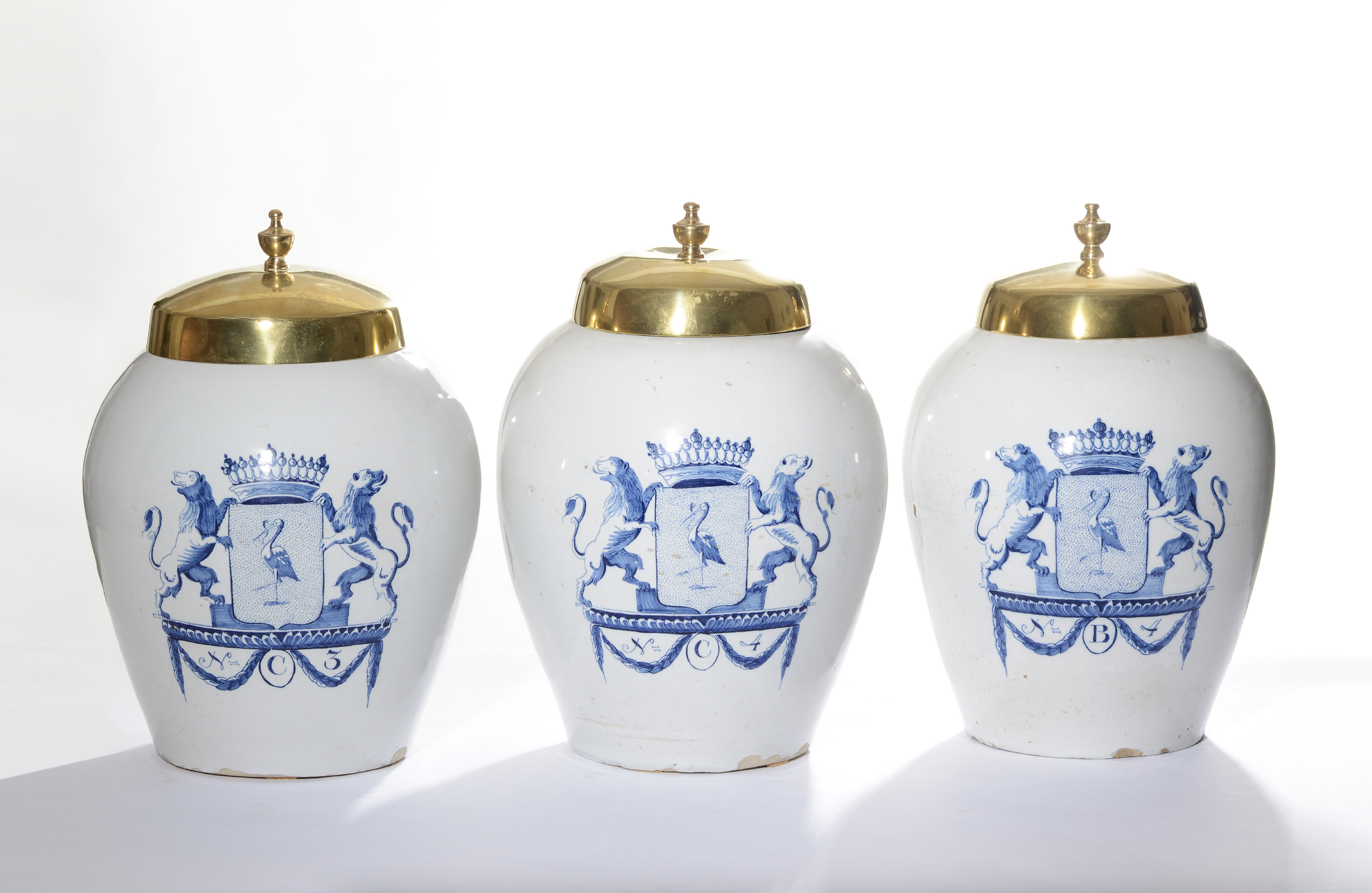 Each painted on the front of the ovoid body with the arms of The Hague: a stork within a stippled (the heraldic tincture for gold) shield beneath a pearl-decorated crown and between lion rampant regardant supporters standing on a gadrooned bracket suspending a husk garland centering either the letter B or C within a roundel and forming two demilune panels inscribed No = and either 3 or 4; the domed brass covers with vase- form finials.

Note
The official name of The Hague is ’s Gravenhage, which translates as the Count’s Wood. The foundations for the city where laid by Floris V, count of Holland (1210-1234), who around 1230 purchased land and built a mansion on the location thought to be the current Binnenhof (Inner Court), next to the Hofvijver (Court Pond). Together with the still extant Ridderzaal (Knights’ Hall) completer by Floris V (1256-1296), this location is the seat of the Dutch government. The stork became the city’s symbol; by 1352-54 the accounts from the Counts included costs for making stork nests, and in following centuries other archival records also mention ‘stork keepers.’ As a symbol of good fortune, the Dutch word for stork, ooievaar, may have been derived from odevare or adebar meaning bringer of luck.

In 1541 the stork appeared for the first time in the arms of the village of ‘s Gravenhage on the bronze bell in the tower of the Great Church, and subsequently a stork was included in the town seals of 1585. However, it was not until 1806, when the Batavian Republic was succeeded by the Kingdom of Holland under King Louis Bonaparte, that the Hague was declared a city by Royal decree. In 1810 the king’s brother, Emperor Napoléon Bonaparte, incorporated the Netherlands into the French Empire and on his visit to The Hague in 1811 declared it a Bonne Ville de l’Empire (‘good city of the Empire’). The first official arms of the city to accompany this title were received from Napoléon in 1813 and included the stork, but also a chief gules with three bees, the symbol of a first- rank city of the Empire. In the same year William VI, Prince of Orange, returned to Holland and in 1815 became King Willem I of the Kingdom of the Netherlands. All cities were then obliged to record their arms by the Hoge Raad van Adel (High Council of Nobility) and for The Hague the description of July 24, 1816 states: “Zijnde van Goud, beladen met een Oyevaar in deszelfs natuurlijke kleur, houdende in deszelfs bek een paling. Het schild gedekt met een kroon van Goud, waarop 13 paarlen en vastgehouden door twee leeuwen van Goud.” (“Begin of gold, charger with a stork in his natural color, holding in its beak an eel. The shield surmounted by a gold crown on which are 13 pearls, and which is held by two gold lions.”)

De Drie Klokken (The Three Bells) factory was sold in 1784 by Willem van der Does to thirteen people, thereby creating the Compagnieschap (Company) De Drie Klokken, which with varying owners and locations, remained in business until 1853.