ANTIQUES AND THE ARTS WEEKLY, JANUARY 3, 2012
Today’s blog showcasing standout examples of Americana that will be offered at the Winter Antiques Show January 19–29 at New York City’s Park Avenue Armory proves that two are better than one with a rare pair of Americana tobacco jars.

Aronson Antiquairs of Amsterdam specializes in Dutch delftware of the Seventeenth and Eighteenth Centuries and has scored a coup by finding a rare example of Americana in Dutch delftware. This pair of tobacco jars was made circa 1790–1800 and each is painted on the front of its ovoid body in a design reminiscent of the Great Seal of the United States of America.

The seal here is represented by an eagle clasping in his beak a banner (banderole) reading Pluri Bednum, while its left talons hold three arrows and in its right, an olive branch. On the front of the eagle is a striped shield. The seal in encapsulated inside an oval garland with flowers. Under the eagle is an inscription reading No 8 on one jar and No 16 on the other jar, likely references to the tobacco the jars were to contain. 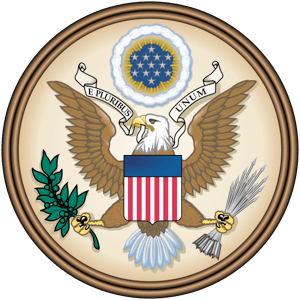 The decoration on these jars, meant to depict the obverse of the Great Seal of the United States, is rare and probably was a special commission. The design of the Great Seal was intended to represent the 13 original states, and on the actual seal, the American bald eagle held 13 arrows and an olive branch with 13 leaves and olives, while the shield contained 13 stripes. Above the eagle’s head were 13 stars, and the banderole was inscribed with the nation’s motto: “E Pluribus Unum” (“From Many, One”).

In this instance, however, the delft painter, unaware of the symbolism of the new republic, simplified the details, scrambling the motto, reducing the number of arrows and stripes, deleting the stars, and painting the images as mirrors of each other so that each eagle faces the arrows of war, rather than the olive branch of peace.

While the changes in the Great Seal may upset history purists, the tobacco jars are no less special. Americana themes among Dutch delftware are quite rare and only two other pairs and a set of three tobacco jars with an American coat of arms are known at this time. The set of three resides in an old Dutch collection, one pair is in a private Manhattan collection and the other pair was sold at auction in October 2003, advertised as “formerly the property of Franklin D. Roosevelt.”

An interesting aside is that US President John Adams (1735–1826), had close ties with the Netherlands. After securing a Treaty of Alliance in 1778, but unsuccessful in this cause in Great Britain, he moved to Amsterdam in January 1781, as minister to the Netherlands. And during 1781–1782, Adams lived only yards away from the present location of Aronson’s offices in Amsterdam. The Netherlands was the second country in Europe to recognize the United States as an independent government.

For more information, contact Aronson Antiquairs at www.aronson.com” or 31 20 623 3103. Make sure to visit the dealer’s booth at the Winter Antiques Show to see the jars and other fine delftware.

Leading experts in this field

For an account of the current state of collections of Delft faience, we have asked Robert Aronson for enlightenment, one…

PROBABLY the world’s top dealer in Dutch Delftware Robert Aronson, who is the fifth generation at Aronson Antiquairs in Amsterdam,…