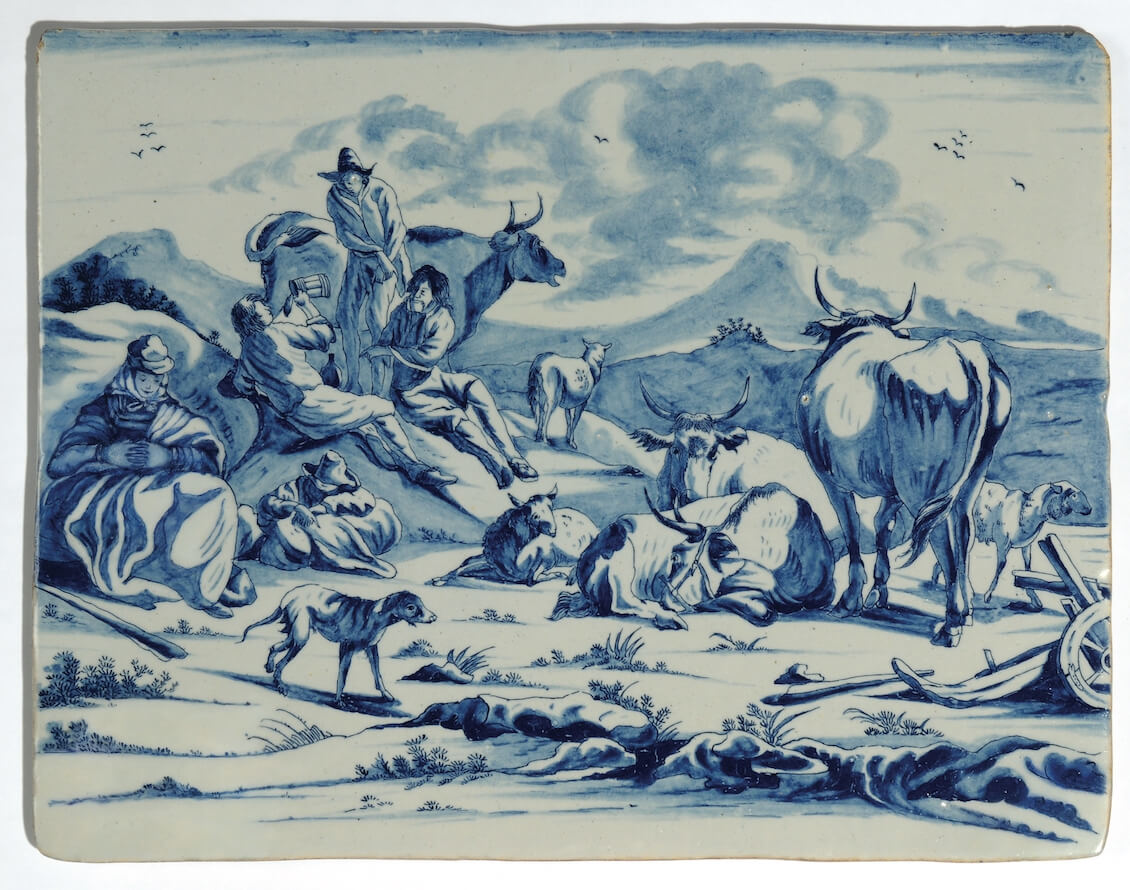 Dutch Delftware plaques stand out amongst the many examples produced during the 17th century for their extreme delicacy and meticulousness. The “porcelain paintings,” as they were referred to in household inventories, were intended to be admired as if they were paintings on panel, canvas or copper. Unfortunately, because of their similarity in appearance to prints and paintings, it is quite rare to find a contemporary representation that illustrates how they were exhibited in their original context. 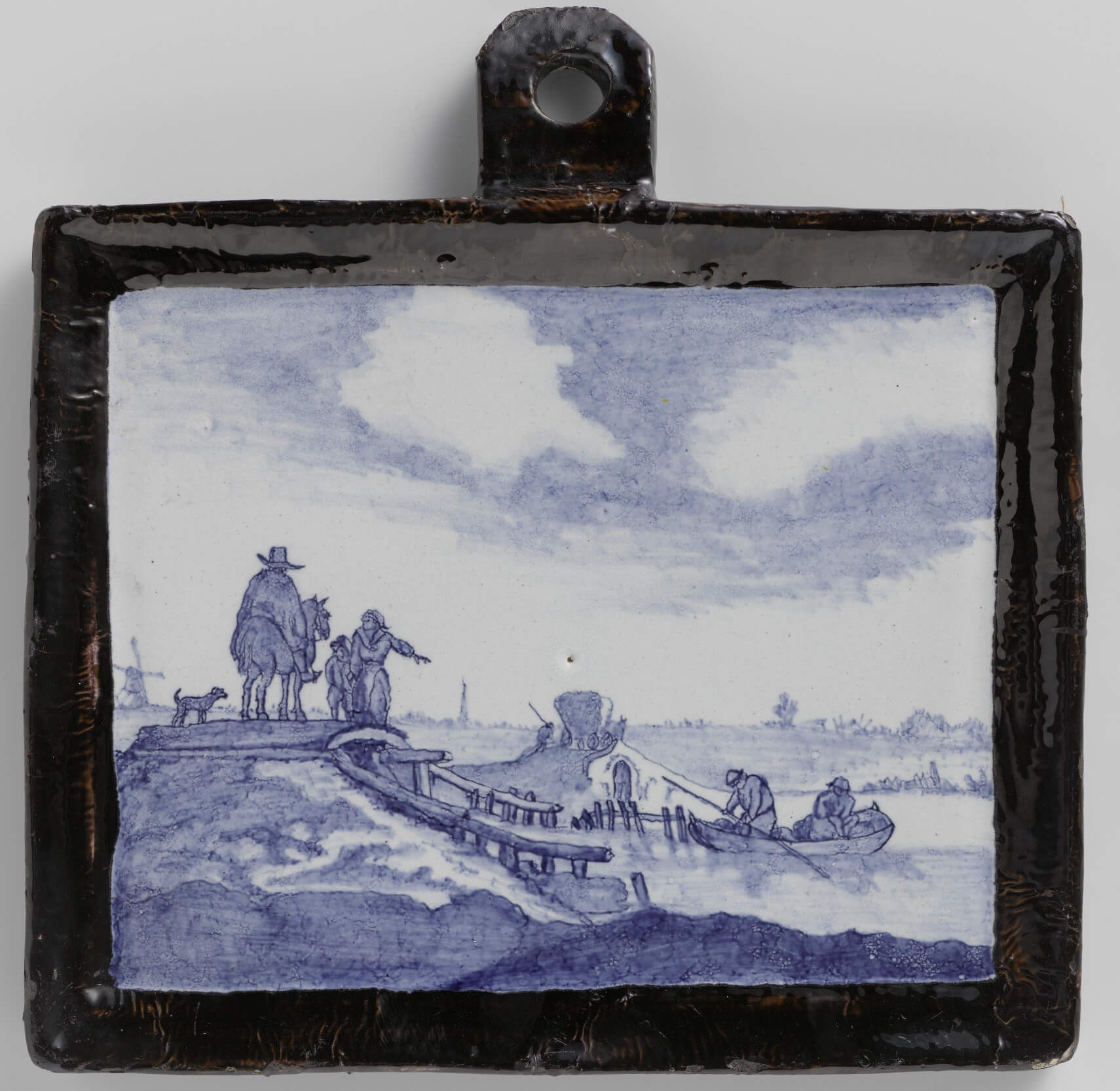 Early 17th century blue and white rectangular plaques were drilled with a hole or adorned with a thin wooden frame for their decorative display on the wall. In some cases, the reverse of the plaque would be chamfered to imitate the wooden panels used by contemporary painters. Delftware designers continued to innovate as time passed, using trompe l’oeil techniques in plaque designs. For example, the moulded borders of this 18th century plaque were painted in manganese to mimic a traditional frame. The blue and white plaque (circa 1775) is in the collection of the Rijksmuseum, Amsterdam (BK-KOG-2570).

By the end of the 17th century, Delftware plaques were marked by their refinement and creativity of design and decoration. The shapes of the pieces, whose contours were often cut out and moulded, became increasingly stylized. This polychrome floral plaque (circa 1755) illustrates the rise of the rocaille style in the 18th century with its rounded shape, scrolls, and shells. The plaque is finely painted with a luxuriant arrangement of flowers in a wicker basket between two flitting insects. The molded frame is painted with a blue-edged iron-red border of white scrolls and green leaves. Four molded scallop shells above leaf-scrolls and small sprigs mark the four corners of the plaque.[1] 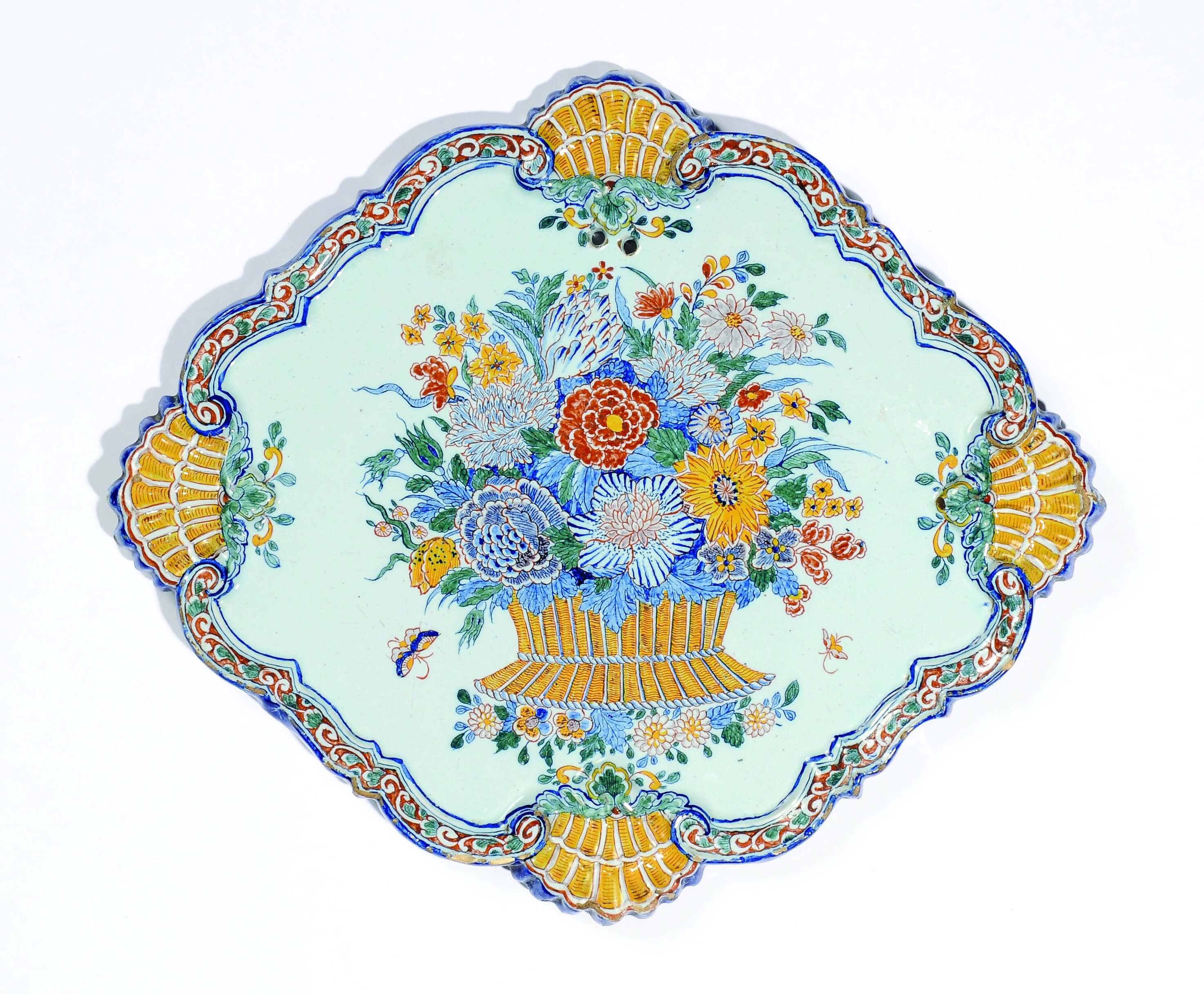 The representations on the plaques are varied, and often reflect contemporary concerns and tastes. For example, the preference for religious subjects is apparent in many plaques that depict scenes from the Old Testament and the Life of Christ. Their popularity can partly be explained by the History of the United Provinces. This pair of polychrome biblical plaques was made around 1800 in the city of Utrecht. Each is painted in manganese with a scene from the New Testament: one depicts Jesus bidding Zacchaeus to descend from the sycamore tree, which he had climbed in order to see Jesus among a crowd of followers; the other depicts Jesus seated beneath a tree, talking with a lad holding his basket of bread and fish, and performing the ‘Miracle of the Loaves and Fishes’ while his disciples distribute the food to the multitude seated in a hilly landscape beyond.[2]

Plaques that represent members of the family of Orange were also special objects because of their political significance. The plaques symbolized the owner’s loyalty to the Orangist factions over the stadholderness. Exotic patterns from China and Japan were also frequent plaque subjects. Delft painters had a large repertoire of oriental motifs from the import of these goods in which they adapted to their own unique designs. 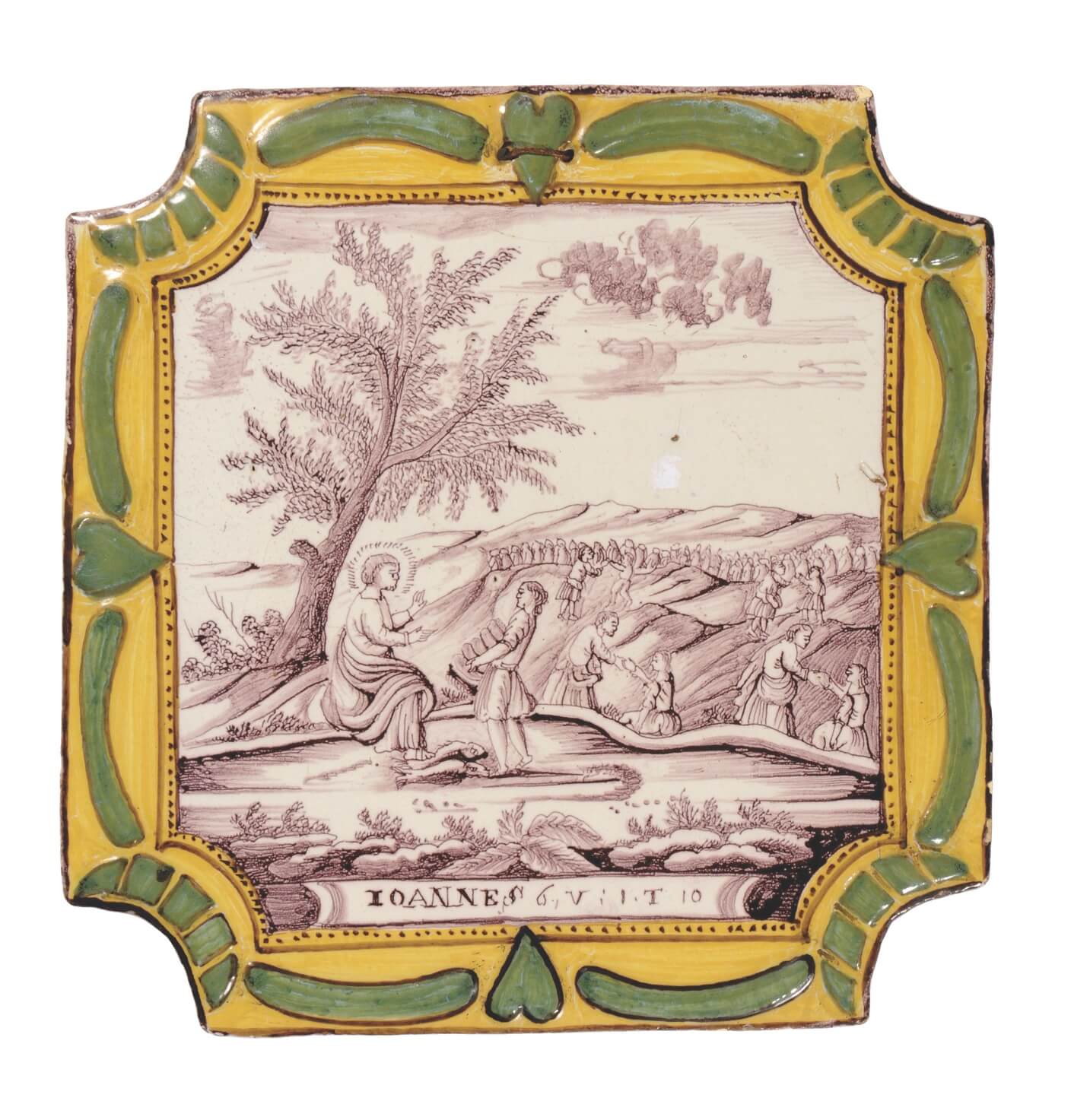 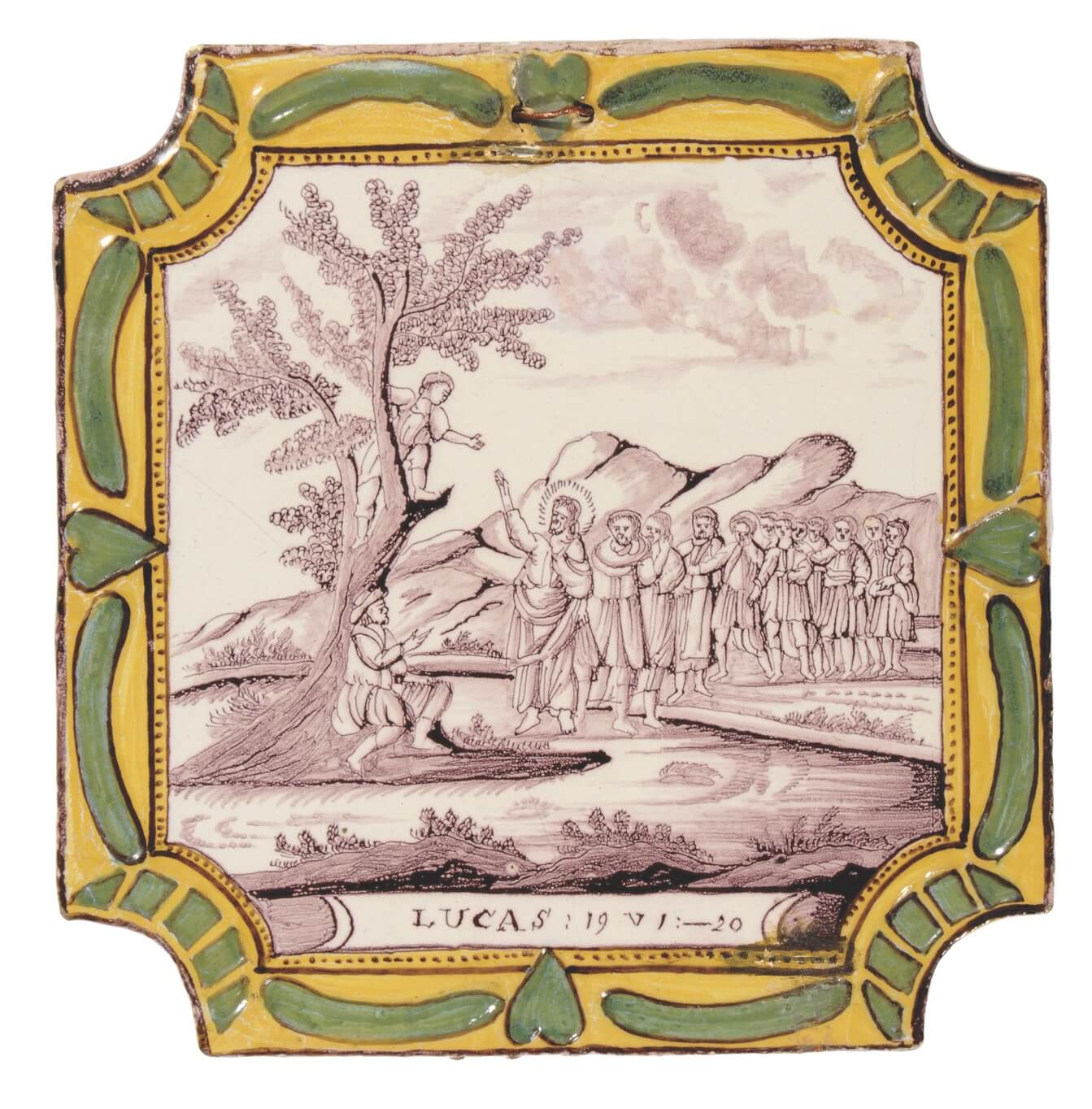 This prolificacy can be explained by the fact that Delftware painters were evolving in a environment that was extremely propitious to artistic creativity, as many were belonging to the famous guild of Saint Luke. The guild letter of 1611 states that the artist association included: “all those earning their living here by the art of painting, be it with fine brushes or otherwise, in oil or water colors; glassmakers; glass-sellers; faienciers; tapestry-makers; embroiderers; engravers; sculptors working in wood, stone or other materials; scabbard-makers; art-printers; booksellers; [and] sellers of prints and paintings, of whatever kind they may be.”[3]

Although guild membership granted Delftware painters compositional freedom, many plaques are inspired by canvas paintings or prints, which were often made after original paintings. As Van Dam explains in his Delfsse porceleyne, the print could be used as a pouncing stencil in order to reproduce the motifs: “This technique involves transferring a design by dusting a fine charcoal powder known as ‘pounce’ through the perforation in the stencil, leaving a dotted outline on the surface beneath. The charcoal powder burns off during the glost firing”.[4]

The prints from the oeuvre of Nicolaes Berchem were popular sources of inspiration for Delftware painters. As Gerdien Wuestman explains, “almost 190 of his designs were published as prints in Holland during his lifetime.”[5]  This blue and white rectangular plaque (circa 1770-80) demonstrates that the taste for Berchem’s animal pieces and landscapes with shepherds lasted until at least the end of the 18th century.

As prints would not always be an exact copy of the original paintings, many Delftware paintings show a variation of the existing models. In some examples, only certain figures are borrowed from the original print. On the blue and white plaque, the trees from the Berchem print were eliminated and the landscape has been cropped on the right side, probably due to the more rectangular shape of the ceramic. 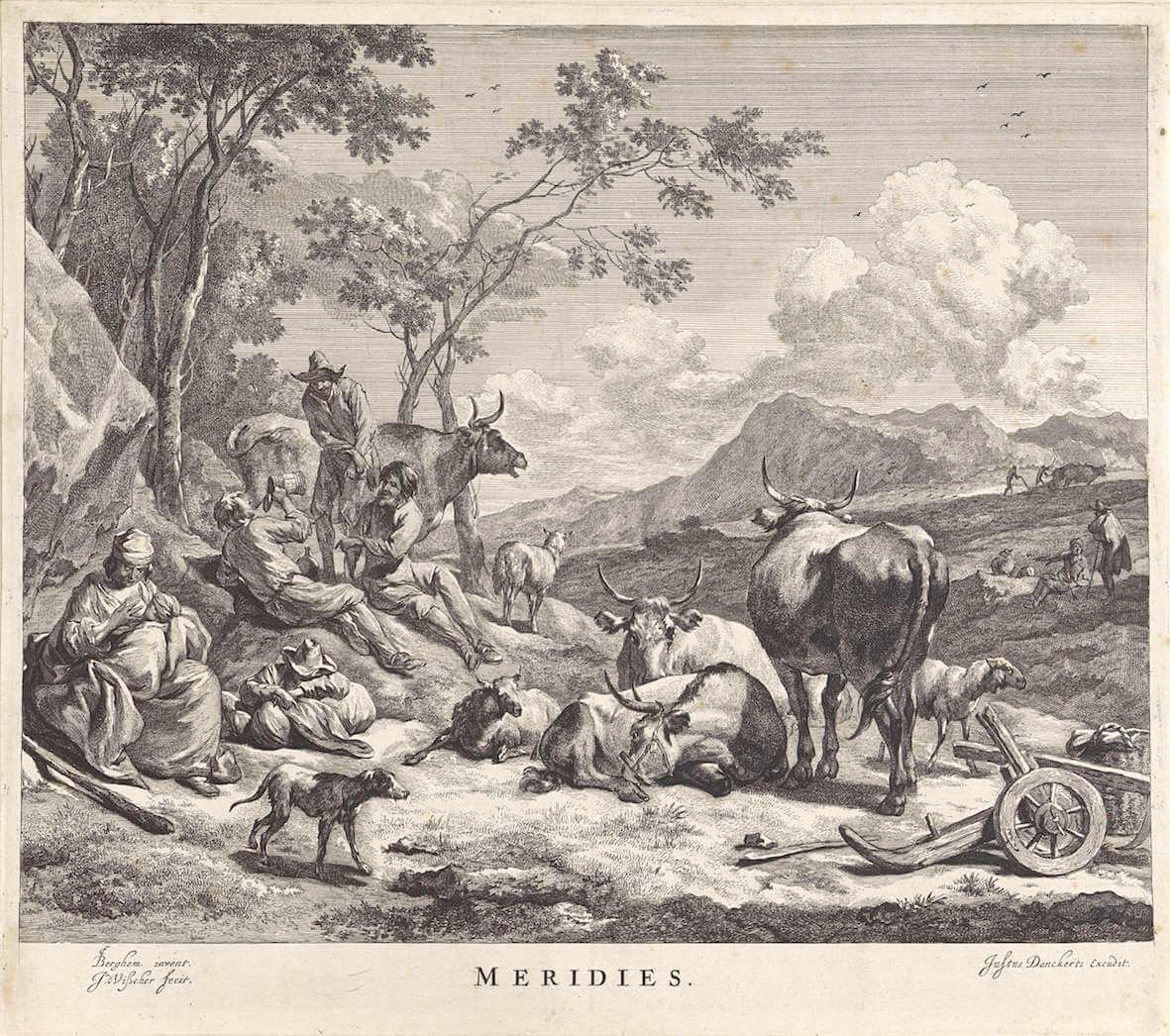 Sadly, unlike canvas painters or art-printers, Delftware artists rarely signed their work. As their sources of inspiration are not necessarily contemporary to the artist, the dating of the plaques is quite difficult to confirm. One rare exception is Frederik van Frijtom, a versatile painter who specialized on canvas and faience. His self-identification on plaques may be explained because he was an independent artist with no association to the Guild of Saint Luke. The painter is particularly known for his very delicate landscapes executed with a pointillist manner. Using different shades of blue, Van Frijtom achieved a characteristic perspective on his landscape compositions.

Despite their considerable popularity, Delftware plaques have been historically ignored until recently. In 1989 the Museum of the Hotel Sandelin in Saint Omer dedicated a whole exhibition to the art form, and hopefully paved the way for more research into this fascinating subject.

[5] G.Wuestman, “Nicolaes Berchem in Print: Fluctuations in the Function and Significance of Reproductive Engraving”, Simiolus: Netherlands Quarterly for the History of Art 24.1 (1996): p 23.